With cellular blueprint for lungs, researchers look ahead to organ regeneration

"Regrowing lungs from the body's own tissue is "the Holy Grail," said Raredon." I don't agree. The Holy Grail will be when lungs can be generated within the body, not via transplant. With lung disease being the number 3 killer in the U.S. and 4th in the world, it simply is not feasible that all who suffer will be able to have a lung transplant. This research is very promising for the few who can access transplants, but not for the masses. 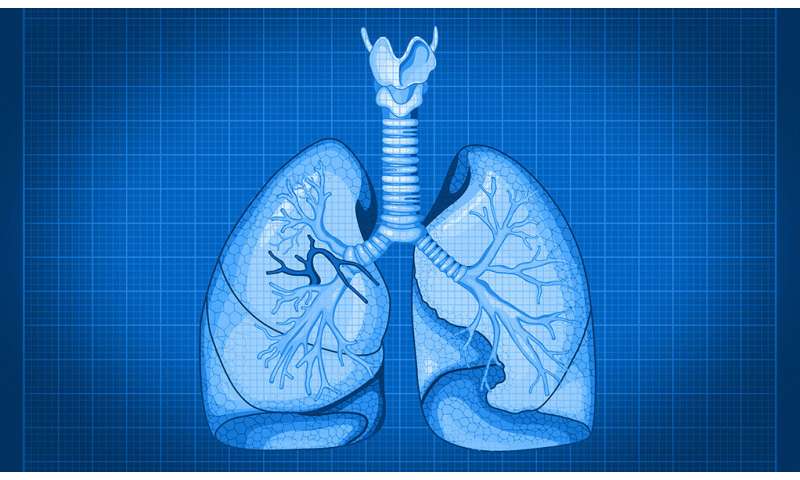 Using sophisticated screening across animal species, researchers at Yale have created a cellular blueprint of the human lung that will make it easier to understand the design principles behind lung function and disease—and to bioengineer new lungs.

The research, published Dec. 4 in Science Advances, represents a collaboration between two Yale labs—that of Naftali Kaminski, M.D., chief of pulmonary, critical care, and sleep medicine at Yale School of Medicine, and Laura Niklason, M.D., Ph.D., the Nicholas Greene Professor of anesthesiology and biomedical engineering and an expert in stimulating growth of new lung tissue from the body's own cells for use in transplants.

In analyzing data obtained through single-cell technology, which offers an ultrahigh-resolution view of up to millions of individual cells at once, the researchers found key cell interactions that were conserved across four species—mouse, rat, pig, and human. Specifically, they revealed several universal cell communication networks driving functions such as cell regulation, disease monitoring, and cell signaling, providing new insights into the mechanisms behind lung development and disease.
"We can take an entire organ, or tissue, and measure all the cell types from a single snapshot," said Micha Sam Brickman Raredon, the M.D./Ph.D. candidate in Niklason's lab who is the study's lead author.

Five years ago, "we didn't have the resolution to look at individual cells and how they behave," said Kaminski, the Boehringer-Ingelheim Professor of Internal Medicine and professor of pharmacology. "It's like we have moved the resolution on cell analysis from looking at the night sky with the naked eye, to a child's telescope, to an observatory and, now, the Hubble telescope."

There are 40 different cell types in the lung, Kaminski explained, and hundreds of thousands of cells altogether, each containing tens of thousands of genes. Since cell contents can change quickly, as in the introduction of white blood cells in response to injury, it's critical, he said, to have a blueprint that shows which cell mechanisms belong to normal functioning.

"We were able to find, by applying a network approach, how these cells interact with each other," Kaminski said.

Regrowing lungs from the body's own tissue is "the Holy Grail," said Raredon. "End-stage lung disease has high morbidity and mortality, and the only curative treatment is a lung transplant." And lung transplants, he noted, are often rejected by the body and require extensive drugs to suppress the immune system that can lead to other negative health impacts.

Bioengineered lungs in various stages of regeneration in Niklason's lab are developing inside custom-designed glass jars.

"There are active bioengineering efforts in our lab growing lung tissue in glass jars with mechanical and chemical stimuli [intended to] coax them into organs," Raredon said. "We can compare our engineered constructs to this blueprint, which shows certain signals present in all species that we want to reconstitute."

The blueprint will also help in finding new molecular targets for therapies to treat lung diseases like idiopathic pulmonary fibrosis, Kaminski said. And the discovery of how lung cells communicate, and how that network is conserved across species, will aid in the study and engineering of other organs.

"We're looking at the basic principles of the development of an organ," Kaminski said. "Applying this approach could allow us to design new organs."
"Single-cell connectomic analysis of adult mammalian lung" appeared in the Dec. 4 edition of Science Advances.
J

Barb; This has pretty much done, Dr. Morrissey from Penn University and others,( nih.gov/news-events/nih-research-matters/new-stem-cell-identified-lung-tissue-regeneration) I just wish they would hurry up but I'm affraid that drug companies might stop them.
B

jgp - I am so glad that you replied. I was worried since you hadn't posted for awhile. I wish they would hurry up too before Big Pharma can put the kabosh on it.
You must log in or register to reply here.
Share:
Facebook Twitter Reddit Pinterest Tumblr WhatsApp Email Link
Top