Science Daily
May 3, 2020 University of Illinois

In regenerative medicine, an ideal treatment for patients whose muscles are damaged from lack of oxygen would be to invigorate them with an injection of their own stem cells.
In a new study published in the journal ACS Nano, researchers at the University of Illinois at Urbana-Champaign demonstrated that “nanostimulators” – nanoparticles seeded with a molecule the body naturally produces to prompt stem cells to heal wounds – can amp up stem cells’ regenerative powers in a targeted limb in mice. 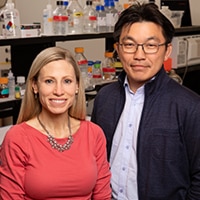 Illinois professors Marni Boppart and Hyunjoon Kong collaborated on the study.
Photo by L. Brian Stauffer
“We wanted to utilize the natural functions of the stem cells and the stimulating factors to address muscle ischemia locally,” said study leader Hyunjoon Kong, a Robert W. Schafer Professor of Chemical and Biomolecular Engineering at Illinois.
Muscle ischemia, or damage to muscle from limited oxygen or blood supply, can result from multiple causes, such as injury to a limb or peripheral artery disease. Stem cells derived from a patient’s own fat tissue are known to produce factors that prompt new blood vessels to grow into the damaged muscle, restoring oxygen and nutrients, and to modulate inflammation in the damaged tissues. However, in vivo experiments have shown limited benefits, as the stem cells’ activity seems to decline after injection into the muscle.

A molecule naturally produced in the body called tumor necrosis factor alpha can spur the stem cells to secrete more of the desired factors. Other studies have tried incubating the cells with TNF-alpha before injection, but the effects fade quickly, Kong said.
The Illinois team decided to try tethering the TNF-alpha directly to the stem cells, creating nanostimulators – nanoparticles laced with TNF-alpha. The nanoparticles bind to a receptor on the surface of the stem cells, providing localized, targeted and extended delivery of TNF-alpha.
“The primary benefit of stem cells toward tissue regeneration is not necessarily the ability for the cells to replace lost tissue, but to release beneficial growth factors and cytokines that assist in the process,” said study co-author Marni Boppart, a professor of kinesiology and community health. “The nanostimulators allow cells to release the beneficial factors longer than they would otherwise. This provides a significant advantage, particularly when cells are transplanted into injured, diseased or aged tissues.”
The researchers tested their approach on mice with surgically induced ischemia in one of their hind legs. They isolated the stem cells from fat tissue, mixed them with the nanostimulators and injected them locally to the mice’s affected legs.
The researchers saw increased blood flow and oxygen levels in the ischemic legs. They also witnessed improvements in mobility – the treated mice could walk longer distances and their legs were stronger.

“We propose that this method is better than methods that require chemical preconditioning, which can affect the viability of the stem cells, take 24 hours or more of culturing and have limited-time effects,” Kong said. “Our idea is to collect adipose tissue in the operating room, separate the stem cells, mix in the nanostimuators and reinject them to the patient – all in one procedure.”
The researchers caution that further work is necessary to optimize the conditions for stem cell harvesting and preparation, and to study the effects over longer terms.
“Peripheral artery disease can cause debilitating pain and long-term disability. Unfortunately, there are no consistently effective treatments for this condition,” Boppart said. “This study is important because it demonstrates the capacity for modified stem cells to effectively treat PAD in a preclinical model, representing a step closer toward relieving pain in humans.”
U.S. National Institutes of Health, the Korea Institute of Science and Technology and A*STAR in Singapore supported this work. Boppart and Kong also are affiliated with the Beckman Institute for Advanced Science and Technology, the Carl R. Woese Institute for Genomic Biology and the Carle Illinois College of Medicine at the U. of I.
You must log in or register to reply here.
Share:
Facebook Twitter Reddit Pinterest Tumblr WhatsApp Email Link
Top