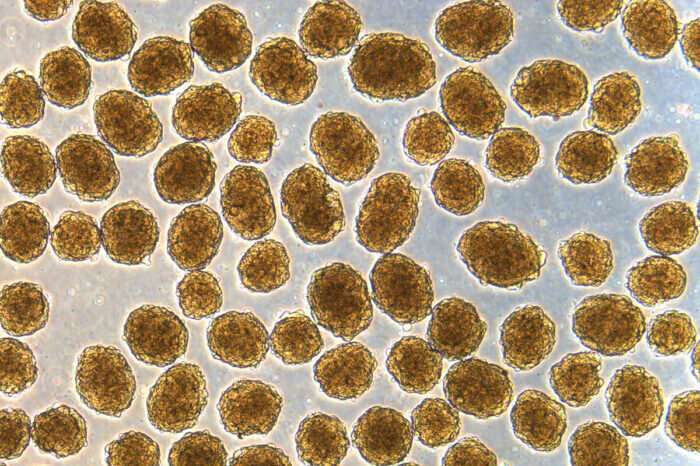 Shown are clusters of human insulin-secreting beta cells, as seen under a microscope. Jeffrey R. Millman, PhD, and his team produced these cells from stem cells, using a new, efficient technique. The cells were able to rapidly cure diabetes in mice for at least nine months. Credit: Millman laboratory
Researchers have converted human stem cells into insulin-producing cells and demonstrated in mice infused with such cells that blood sugar levels can be controlled and diabetes functionally cured for nine months.

The findings, from researchers at Washington University School of Medicine in St. Louis, are published online Feb. 24 in the journal Nature Biotechnology.
"These mice had very severe diabetes with blood sugar readings of more than 500 milligrams per deciliter of blood—levels that could be fatal for a person—and when we gave the mice the insulin-secreting cells, within two weeks their blood glucose levels had returned to normal and stayed that way for many months," said principal investigator Jeffrey R. Millman, Ph.D., an assistant professor of medicine and of biomedical engineering at Washington University.
Several years ago, the same researchers discovered how to convert human stem cells into pancreatic beta cells that make insulin. When such cells encounter blood sugar, they secrete insulin. Still, previous work has had its limitations and had not effectively controlled diabetes in mice.
Now, the researchers have shown a new technique they developed can more efficiently convert human stem cells into insulin-producing cells that more effectively control blood sugar.
"A common problem when you're trying to transform a human stem cell into an insulin-producing beta cell—or a neuron or a heart cell —is that you also produce other cells that you don't want," Millman said. "In the case of beta cells, we might get other types of pancreas cells or liver cells."
Off-target pancreas and liver cells don't hurt anything when implanted into a mouse, but they don't fight diabetes either.
"The more off-target cells you get, the less therapeutically relevant cells you have," he said. "You need about a billion beta cells to cure a person of diabetes. But if a quarter of the cells you make are actually liver cells or other pancreas cells, instead of needing a billion cells, you'll need 1.25 billion cells. It makes curing the disease 25% more difficult."
Using the new technique, Millman's team found far fewer off-target cells were produced while the beta cells that were made had improved function. The technique targets the cells' internal scaffolding, called the cytoskeleton. The cytoskeleton is what gives a cell its shape and allows the cell to interact with its surrounding environment, converting physical cues into biochemical signals.
"It's a completely different approach, fundamentally different in the way we go about it," he said. "Previously, we would identify various proteins and factors and sprinkle them on the cells to see what would happen. As we have better understood the signals, we've been able to make that process less random."
Understanding that process has allowed Millman's team to produce more beta cells. Importantly, the new technique works efficiently across stem cells from multiple different sources, greatly expanding the ability of this technique in the study of disease.
"We were able to make more beta cells, and those cells functioned better in the mice, some of which remained cured for more than a year," Millman said. "
He explained that there still is much to do before this strategy can be used to treat people with diabetes. They will need to test the cells over longer periods of time in larger animal models and work to automate the process to have any hope of producing beta cells that can help the millions of people who currently require insulin injections to control their diabetes. But the research is continuing.