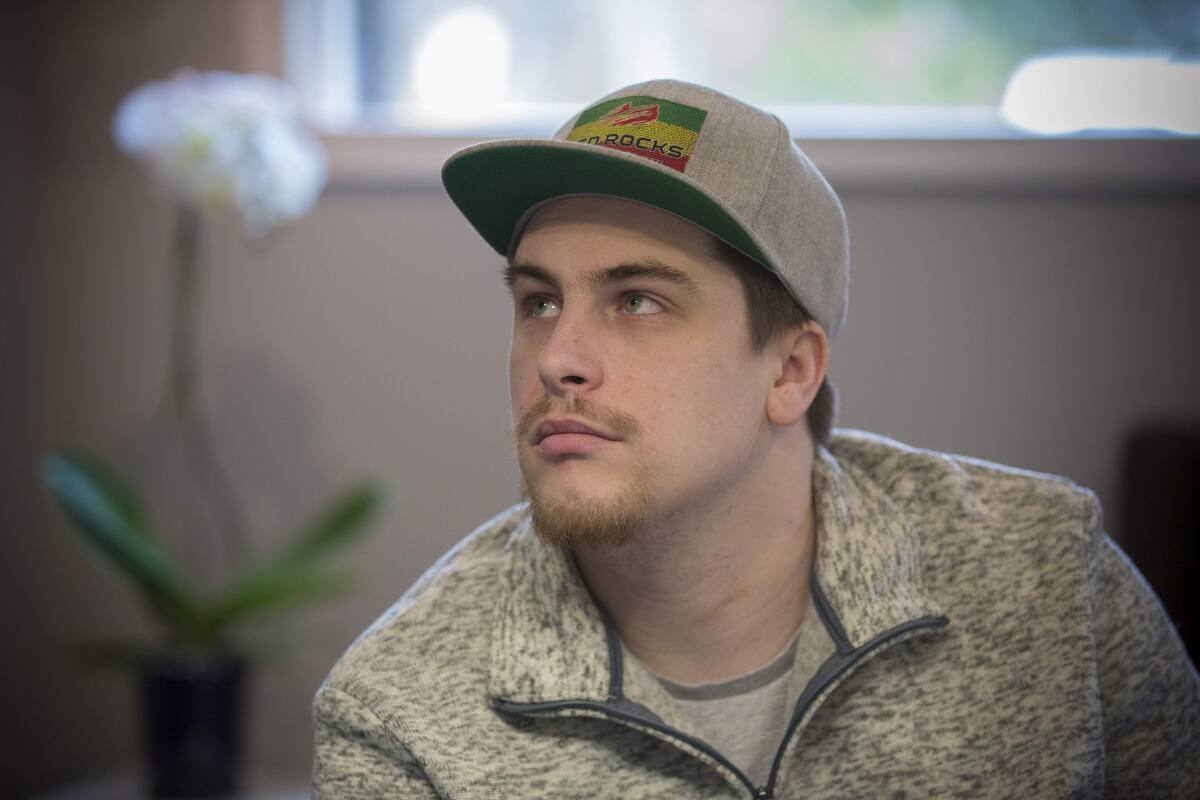 Sonoma dentist Tyler Boynton with Dario Minatta prior to the removal of his wisdom teeth.

Ever since his C6 vertebrae shattered in a snowboarding accident two years ago, leaving him paralyzed from the chest down, Dario Minatta, 24, has never let go of the hope that he will walk again.
Sonoma oral surgeon Tyler Boynton just gave him a new reason to believe that someday there may be a cure for his spinal cord injury.
When Boynton removed Minatta’s wisdom teeth this past fall he sent them to a lab in Kansas City where the stem cells in the tooth pulp were removed and stored for potential curative use in the future.
“Now we wait for technology to figure it out,” Minatta said.
It probably won’t be soon, and maybe not ever, but medical science is advancing quickly in its research to regenerate injured tissue, bones, muscles and nerves using stem cells. Healthy wisdom teeth of people under 30 contain abundant stem cells, making them perfect for banking.
Boynton had never sent wisdom teeth to a stem cell storage lab before treating Minatta, and would never remove teeth just for that purpose. But after he had a pre-surgery consultation with Minatta, before necessary wisdom teeth removal that had already been recommended, he did some research and decided Minatta and his parents, Dino and Ally Minatta, may want to consider storing the teeth through Stemodontics. They decided to go for it.
“I have taken out thousands of wisdom teeth and usually just throw them in the biohazard bin,” Boynton said. This time he put Minatta’s in a special transport cold pack and overnighted them to the FDA-approved lab. He said tooth banking labs have been around for several years, but Stemodontics is different. “They extract the pulp from the wisdom teeth, then the stem cells from the pulp, and grow the stem cells to make a larger number. The purpose is to have more,” he said. “And they assure that the stem cells are viable before freezing them.”

The Minattas were unaware of this technology prior to Boynton’s recommendation, and the surgeon had a special emotional pull in his desire to help.

When Boynton, 38, was a sophomore at Trinity College in Connecticut, he broke his neck. He was spending a semester abroad studying in Australia and while “roughhousing around” with some friends he fell backward and hit a tree, breaking his C2 vertebra. “I was lucky that there were no neurological deficits.” He was “millimeters away” from permanent spinal cord injury and the experience changed the course of his life.
After time in the hospital in Australia and months wearing a neck brace, Boynton was still in serious pain a year later and had back surgery to freeze his C2 to his C1 vertebrae, curing him with the exception of very limited range-of-motion loss in his neck. “My injury made me want to totally change my career path. I went from being interested in finance and an MBA to wanting to do health care.”
Boynton transferred to the University of Connecticut and became a pre-med major, beginning nine years of medical training. “I wanted to do something important with my life to help other people,” he said. He decided to be an oral surgeon after witnessing a six-hour surgery during med school, watching a tumor being removed from a patient’s jaw.


Five years ago Boynton took over Lee Schaller’s long-time practice when he retired and he and his wife, Sonoma native Jeanne Louise Camus, moved to Sonoma. They have a 2-year-old son and are expecting another child.

“When I met Dario all I could think was ‘I have to help this kid,’” Boynton said. “There’s nothing out there currently and I made it clear that there is nothing they can do now. But medicine is changing so quickly you never know.” And if one day wisdom teeth stem cells can help regenerate injured spinal cords, Minatta will have his reserved and ready to use.
Boynton was amazed and impressed by Minatta’s upbeat demeanor and positive outlook. “He’s such a kind, sweet person and he’s got such a great attitude. He has control over his attitude and he’s chosen to be positive. I have to believe it will take him very far in life. He’s doing whatever he can try to get better,” Boynton said.
Minatta is a native Sonoman and graduated from Sonoma Valley High School (SVHS) in 2014. He was a junior at University of Nevada at Reno two years ago when he took a semester off and returned to Sonoma. On a New Year’s 2018 trip to Breckenridge he had a snowboarding accident, landing just the wrong way. An excellent and avid boarder, he was taking an easy run when the accident happened.
He spent months in rehabilitation therapy at Craig Hospital in Denver, recognized as one the foremost facilities for spinal cord injuries, before returning to his parents’ home in Sonoma. He then started an extensive physical therapy program at Sci-Fit in Pleasanton, keeping his muscles strong and learning to adapt to his physical challenges. He is still working out at Sci-Fit, his parents or a buddy driving him on the three-hour round-trip journey several times a week. His father, also a Sonoma native and a general contractor, remodeled the downstairs bed and bath of their Eastside home, adapting them so Minatta has easy access throughout the downstairs in his wheelchair.
Minatta is so thankful to his parents who have been completely there for him since the accident happened Jan. 10, 2018. “I have never seen my parents cry or laugh as much as they have since I’ve been injured,” he said.

Minatta can move his arms and shoulders and said that he’s learning to adapt to his limited finger use. “I made eggs in a pan at the stove myself this morning,” he said.
His mother Ally is his full-time caregiver. She went with him to Frazier Rehab Institute in Kentucky, run by the Christopher Reeve Foundation, from April to July last summer. There Minatta had specialized physical therapy four hours a day. He also underwent electrode therapy on his arms and legs to try and revitalize his muscles.
He was happy after those intense months to be able spend a week in Hawaii for the wedding of one of his close SVHS friends, Kaitlyn Boldt. “It was awesome. Our whole group of friends was there from high school and it was great to be with the whole squad,” he said. “We are going to be a good posse forever.”
His friends have been great about keeping in touch. And pretty much every evening he plays online video games with some of his longtime Sonoma friends, even though most of them now live elsewhere.

Minatta took two online classes at Santa Rosa Junior College last semester and next semester will attend one class on campus. He originally majored in business administration, but has now narrowed his choice down to accounting. “I want to be in a field I can do from my chair,” he said, “And I’ve always been a numbers guy.”

One of the things he misses most is not being able to drive. He’s been researching adapted pickup trucks, but that could be a ways down the road. Such a vehicle, which he could drive with his hands and has a lift to help him get in and out are prohibitively expensive, and his mother is not quite sure that he’s ready yet.
Wearing a cap with the words Live Lucky and a four leaf clover, Minatta said, “I feel solid, I have no regrets whatsoever. Bad days are rare and they make me appreciate the good ones.” Looking at her son and the genuine smile on his face, Ally said, “He’s made it possible for my husband and I to get through this.”
Once in a while, when he is in the shower, he lets himself feel bad about what’s happened. “It’s easy to cry in the shower because you can’t tell how many tears there are,” he said. “There are bad days for sure, but they don’t come that often. Family and friends don’t let that happen. I’ve got to keep my spirits up. That’s the only thing I can do.”
Minatta stops to think for a minute about where he sees himself five years from now.

He hopes to have a job and be living on his own. “And if a missus finds her way into my life that would be dope.” He and his former girlfriend, who was with him at the time of his accident, have drifted apart and she is now living in southern California. But they keep in touch and are still friends.
“I’d love to be walking in five years, but will that happen? Probably not in five years,” he said, but he believes it will happen eventually. “There are a lot of unknowns.”
“I’ve learned to live with it for now, but I don’t want to have to live with it forever,” he said about his disabilities. He is optimistic that whether through stem cell research or robotics or medical advances he doesn’t even know about now, his physical life will continue to improve.
“I think someday there will be a cure.”
You must log in or register to reply here.
Share:
Facebook Twitter Reddit Pinterest Tumblr WhatsApp Email Link
Top