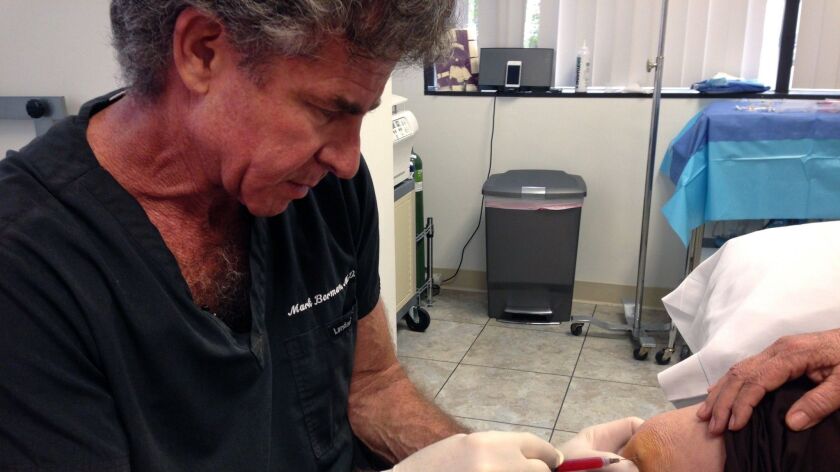 In this 2014 photo, Mark Berman of the Cell Surgical Network injects a patient at his practice in Beverly Hills with a solution that he says is rich in adult stem cells.
(Raquel Dillon / Associated Press)
By MICHAEL HILTZIKBUSINESS COLUMNIST
JAN. 28, 2020 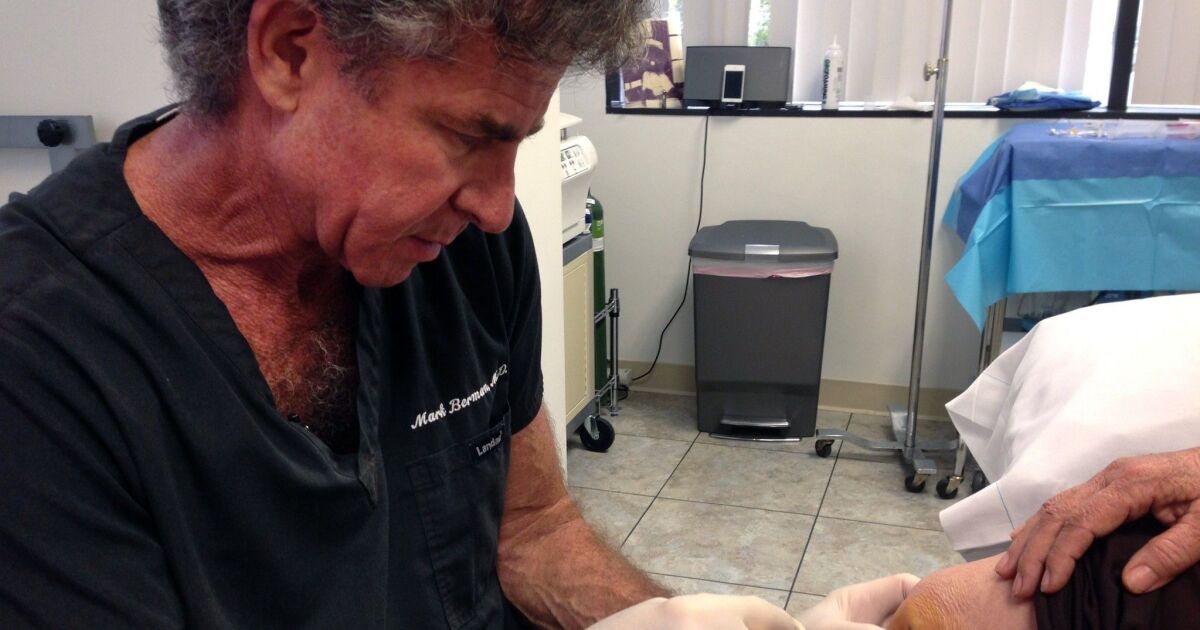 A U.S. judge throws a wrench into the FDA's campaign against stem cell clinics.

A Los Angeles federal judge has rejected a government motion that could have shut down a network of clinics offering customers allegedly unauthorized stem cell treatments.
The ruling by Judge Jesus G. Bernal potentially deals a setback for the Food and Drug Administration’s campaign against treatments using stem cell preparations that the FDA has not approved.
In the ruling published late Monday, Bernal denied the government’s motion for summary judgment in its lawsuit against the Rancho Mirage-based California Stem Cell Treatment Center, the Cell Surgical Network, and the latter’s founders, Mark Berman and Elliott Lander. Bernal ruled that the case was suitable for trial.
Through the lawsuit, the FDA effectively sought to shut down the defendants’ activities, which it asserted involved using unapproved drugs to treat patients suffering from conditions such as cancer, arthritis, multiple sclerosis, diabetes, Lou Gehrig’s disease and Parkinson’s.

We’ve ... seen some bad actors leverage the scientific promise of this field to peddle unapproved treatments.
Click to expand...

FDA, 2018
The defendants countered that their treatments involved substances that were exempt from FDA oversight, in part because they came from the patients’ own bodies.
The judge’s ruling dismayed one advocate of tighter regulation of clinics offering unlicensed treatments. “Unfortunately, this all leaves the door potentially still open for hundreds of clinics to sell the unproven fat stem cell product at the heart of this case,” UC Davis biologist Paul Knoepfler wrote on his blog.
The government’s California lawsuit was filed May 9, 2018, simultaneously with a complaint against Florida-based U.S. Stem Cell Clinic. In that case, U.S. Judge Ursula Ungaro of Miami granted the government’s motion for summary judgment last June, effectively shutting down the Florida operation. The two judges’ rulings don’t have any direct legal effect on each other.
As Knoepfler observed, one reason the judges’ decisions may have diverged is a decision handed down by the U.S. Supreme Court last June, about three weeks after Judge Ungaro’s ruling. That decision, in a case titled Kisor v. Wilkie, narrowed the circumstances in which courts must defer to a federal agency’s interpretation of its own rules.
Bernal cited the Kisor ruling in finding that the FDA’s interpretation of its rules defining stem cell preparations as illicit drugs “is not entitled to deference.” By contrast, Judge Ungaro ruled that the agency’s interpretation “must be given deference.”
The FDA declined to comment on Bernal’s ruling because the case is still “pending litigation.” Berman told me by email Tuesday that he has long maintained that “the FDA is violating their authority - especially with respect to a surgical procedure. The judge was very astute in his analysis.”
In June, however, the FDA had praised the Florida ruling, calling it “a victory for the FDA’s work to stop these bad actors and to protect patients.”
In the California case, the FDA, working through the Department of Justice, asserted that the purportedly stem-cell-rich solution used by the defendants to treat “a number of degenerative conditions and diseases” required FDA approval, which it did not have.
Moreover, the FDA lawsuit stated: “There have been no adequate and well-controlled studies performed on the ... products demonstrating that they are safe or effective for any indication.”
The FDA had described the two lawsuits as steps in its campaign against providers offering disease sufferers unauthorized and unproven treatments by using the lure of “stem cell” medicine to suggest the treatments were effective.
Typically, providers targeted by the agency remove fat tissue from patients by liposuction, treat the fat to extract or concentrate stem cells in the tissue, and inject the concentrate back into the patients for supposedly therapeutic purposes. No treatments using fat cells have been approved by the FDA.
“Cell-base regenerative medicine holds significant medical opportunity,” then-FDA Commissioner Scott Gottlieb said at the time the lawsuits were filed, “but we’ve also seen some bad actors leverage the scientific promise of this field to peddle unapproved treatments that put patients’ health at risk.”
The FDA also asserted in its lawsuit that the defendants had not instituted safeguards in its manufacturing processes to “prevent microbial contamination” of their products.
The California defendants argued that their procedures fell within an exemption from FDA jurisdiction for cells and tissues that are removed from a patient and reimplanted in the patient during the “same surgical procedure.”
The FDA contended that the pre-implantation treatment of the fat tissue alters it sufficiently to remove it from the exemption. Bernal found that, given the government’s and defendants’ competing claims about the procedure, “there is a triable issue of fact and summary judgment is not appropriate.”
You must log in or register to reply here.
Share:
Facebook Twitter Reddit Pinterest Tumblr WhatsApp Email Link
Top